Ready for your first big project of 2017?
Introducing Barbara J. Eikmeier's Waddington Road Sampler Block of the Month!
This gorgeous quilt uses the Magic Triangle ruler (included with the BOM) and comes with two center medallion options. Barb used all but one of her Waddington Road collection fabrics in it.
We asked Barb to share her design process with us.

Q. This BOM has a medallion style setting, which is very different from your previous Vintage Sampler BOM.
BE: Yes, I wanted to do something totally different than last time. I liked the idea of doing a medallion, so I started with that and worked out, adding block rows and smaller pieced borders.

Q. This BOM has two center medallion options. Can you tell us about that?
BE: The original center is the broken star, which you see in the main photo. It’s really not that hard to make the way it’s sewn together, but it can look intimidating. I didn’t want the center to be the reason some people chose not to do the BOM, thinking it was too hard, so I designed an optional center using larger pieces that still creates a star effect.  Both center options are included in the BOM. 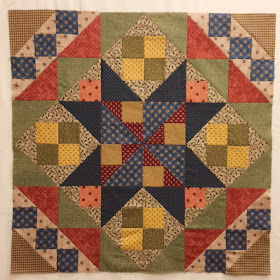 Q. Do you have a favorite block in the quilt?
BE: I really love the block that almost looks like it has a circle in it. It’s in the quilt four times!  It’s also really fun to make. 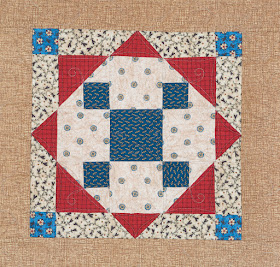 Q. You chose a beautifully textured tan print for the background.
BE: As soon as I saw that fabric finished (as opposed to digital), I fell in love with it. It’s very mellow and not directional. I thought it would be beautiful in the background. And because it’s a medium value, I chose to use lighter prints in the background of the blocks and the center medallion, which helps them to stand out. 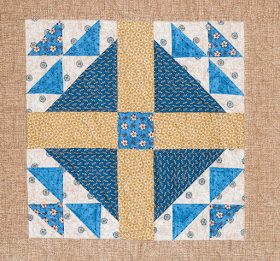 Q. Tell us about the pieced borders.
BE: I really like the smaller pieced borders. The flying geese border framing the center medallion creates a strong focal point. I added the red and blue QST border around the outside because it uses the magic triangle ruler for another method. They come out perfectly using the ruler. 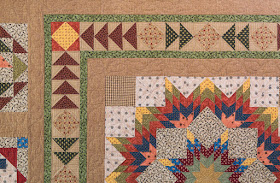 Q. What are the details of this BOM?
BE: It has a medallion center and then sixteen additional blocks (a few are repeated). The quilt measures 90” square. It’s set up as an 8-month BOM, and shops will be starting it as early as February!